In this third phase – where the students had to discuss and integrate the relevant values and consider possible solutions locally/nationally and globally – History could hand over, via a last part on the rising inequality in the world, the newly won insights to the playmaker LVB/B that first was to couple the theory to a more practical or illustrative complement: a visit to the many civil society organizations of the World Social Forum that also gathered in Brussels that year.

The students on their presented tour came into contact with unions and other organizations that concerned themselves with migration, the right to housing and fiscal justice. After having attended the political debate, the students on the train on the way back home got an answer to their question on what the common vision of this WSF might be. I based my answer on what I remembered from the book by Dirk Barrez (2001): De antwoorden van het antiglobalisme (The answers of the anti-globalist movement), Roeselare: Roularta.

‘It is still far from clear where they all want to go to together. There are many, even big differences between the groups. Yet there are some five things that often return in their more separate views, five things that might make these groups into the first real world citizens groups working towards a new ecologically sustainable and more democratic world. Their central point it seems to me is that the all somehow want to bring the transnational economy back under the supervision and control of society by demanding more democracy from bottom to top. That’s also what they mean with their slogan “Another world is possible”. So they want to build a different world-system. These I believe are their central building stones:

a) Their ideas for regional markets do not have to be understood as if they would want to withdraw from international trade. It refers more to the way they want to protect especially agriculture from the negative aspects of the world-market where prices can sharply fluctuate, easily hurting entire populations depending on just one or two crops. It means they want to reorient food production more towards local and regional markets than to the export for the world market. These internal agricultural markets should also be much more diversified. For this they want and need to break the power of multinational companies and big landowners. So that not only would more people find jobs in agriculture but also to halt ecological exhaustion by the energy intensive production methods and environmentally devastating global transport systems. But it does not mean that would be against international trade as long as that would or could be fair trade.

b) The also want that in a global society the economy should respect the human rights of all workers, a decent living and wage, social services. To secure more global democracy and equality. Also in the sense of a global government which should be built with the organizations that make up the UN – on the condition these be more democratically structured.

c) All governments should take care of more just taxes. Here they are against fiscal paradises or tax havens and bank secrecy, and for taxes on capital and financial transactions like the Tobin tax which you all just heard them talk about. What such taxes should deliver could be used for fulfilling the most basic needs of all.

d) A fourth returning point is a world basic income understood as free money to the poorest to start up small enterprises and make local markets more efficient and productive. Other ideas on the creation of wealth are to be found among those that want to replace the classic company structures by co-operations – a company structure where workers are co-owners, on which consumer demands have more direct influence and where the profit motive is tempered or even subsumed under job security, sustainability and real needs.

e) A fifth a final set of ideas put them against the transnational capitalist class in the most explicit way. That class wants or needs to make everything into commodities, wants to open up ever more markets and reduce public services. The WSF wants to end the commodification of everything. Especially of what still remains of nature, the wild, our own body, water, but also science, education, care for the sick and elderly, etc. These are commons, common goods and rights of all, often also sectors where still a lot of work is to be done and los of jobs could be created. Betting on these means that they also choose for more social bonds instead of more material goods, what only leads to consumption beyond what is sustainable or healthy and to even more profits for the capitalist class.’ (JWW, p.238-239)

This excursion proved absolutely useful when this general vision was still more concrete in the action of the Financial Action Network (FAN) the students also visited. It was there the students began to look differently at politics (in the broad sense of the word). 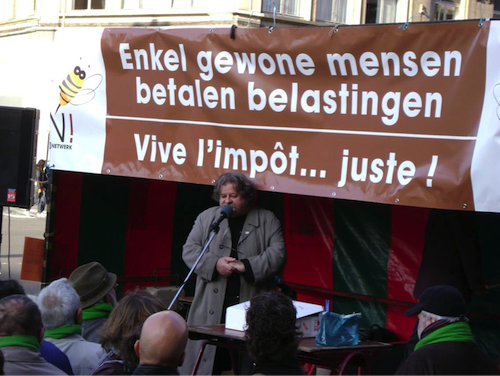 ‘Although paying a visit to the groups engaged with migration was the thing the students wanted most, it was the information dispersed by FAN that would spark in Rob and the others the indignation over so much injustice. It was there and then that the students would go from the critique of the refugee problem to the political questioning of their world – as we more or less predicted in the preparation of our subject. In its brochure FAN explained what the students had so far only touched upon in the most abstract way. To explain their reaction – or illustrate how the LWZ could this way activate many of the matrix items – we can copy the following part:

“One and a half million Belgians (one out of seven) lives on or below the poverty line (822 euro per month). Opposite that financial capital represents 300% of the Belgian GNP. That’s about 300.000 billion old Belgian Franks (some 7500 billion euro, MS). That is the largest comparison per head in Europe. What’s more, the resulting income is barely taxed. This explains the thousands of rich French and Dutch fiscal refugees coming to Belgium, looking for all kinds of financial privileges: back secrecy, hardly any tax on profits from the stock market, no capital tax and no fair tax system in general. In Belgium this rests on taxes on labor and consumption. Personal taxes weigh heavily on small and medium incomes. There is a sharp unbalance between taxes on labor and taxes on financial income (…) Taxes are necessary (…) They make it possible to redistribute wealth in society (…) Most mobile incomes, so stemming from capital ownership, can escape ever more and ever better from taxes. In twenty years fiscal paradises or tax havens in the world have grown in numbers from some thirty up to now 72.”

“How is that possible?! In all this misery these people are getting richer and richer or what?!” That was the moment when Rob in the presence of others declared his indignation over what I had just read to them. As a response he immediately wanted me to repeat what I had taught them about left and right, socialism and liberalism and how these corresponded to present day political parties. A remarkable change. Because before Rob explicitly was not interested in politics at all, now he thought people “should have an idea of how to better organize this shit”. He expressed himself, let’s say somewhat more direct than most others but he definitely could take the lead like no other could. Whilst I tried the best I could to answer his faster and faster coming questions – like “right stands for accepting huge inequalities, being left means taking sides with the poor and weak” – the others joined in (…)’ (JWW, p.236-237)

In the third part of this phase we would also go from the general or the abstract to the concrete – in fact from the global to the national. But before that there were the lessons about the values and objectives of World Citizenship Education. These the students had to learn and then evaluate their own learning process with. Because they had to present an overview to their parents, principal and jury during their info-evening in one of the historical buildings of the city of Oudenaarde. The content we used was based on the educational principles of Kleur Bekennen, an organization that has already moved mountains for WBE in Belgium. This way the students began to see more clearly exactly where this trajectory wanted to take them.

Cultural: a world citizen looks for connection in diversity, for what unites us culturally and religiously. Only when we know who we are, what values we have and recognize the diversity within our own communities, can we entertain a meaningful dialogue with others.

Ethical: a world citizen is convinced that everybody shares one and the same world. He keeps an eye to the national and international context in which events happen. That way he can analyze and understand the events that influence his life. A world citizen cherishes diversity and shows real engagement and solidarity with other people. He knows his acts can have consequences for the environment, the animals and humans on earth. World citizens realize they have a responsibility for the future of all and have to solve common problems together.

Political: a world citizen wants world democracy. By participating on local and global levels, by assembling all forces and concerns form below, he can help organize and improve our world.

– Work together with others and take up responsibility in society

– Understand diversity, value it and think it natural

– Be prepared to solve conflicts peacefully

– Know how to participate in policy at school, locally and internationally

– Work in a process manner (the journey is more important than the result, work with an eye on influencing school policy)

– Get the pupils to participate in an active way

– Involve partners in and around the school

– Evaluate and adjust (including self evaluation) 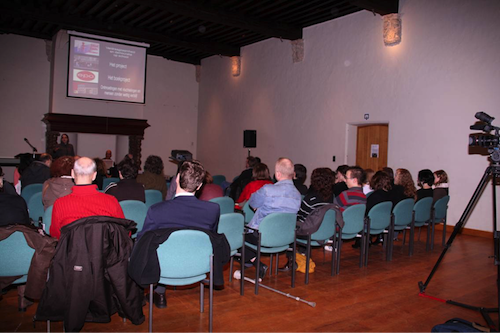 During the info evening the students presented their parents what they did so far in their WELT trajectory and the jury members (School Zonder Racisme, vzwde8, Kiekeboe, the publisher, vzw El Ele, Intercultureel Netwerk Gent) all gave their idea on the students’ progress. Also the next, most important part was announced: the interviews with undocumented migrants and refugees. We decided to end the evening with a fragment from a student’s diary.