A second part of the Analysis would be made for History and was to clarify the history of “illegal migration”. It was good fortune that that year the Centre for Migration and Intercultural Studies of Antwerp University was to hold its international congress on Borderless Solidarity. Seeing how the students really got involved and were performing pretty well we took them along. In small teams they would attend the several workshops on the different dimensions of the subject, of which they would later transmit the content to their classmates in lectures for English and Dutch.

At the congress they also met with several civil society organizations and saw how much their subject was also scientifically studied. For most of them this was their first encounter with university life and as such a major gain for their education. Central to this excursion was attending the lecture of the international expert on the subject Frank Düvell. 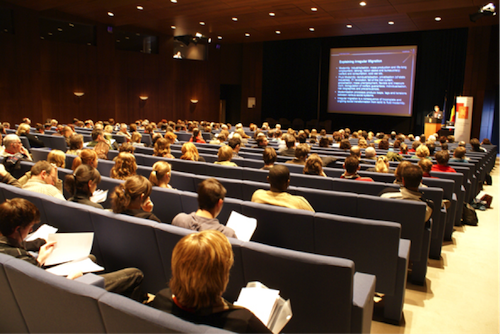 ‘Around 10 o’clock Frank Düvell, professor at Oxford and expert in migration policy, was to give his lecture on irregular migration to the more than hundred participants. At the counter some people gazed at the youngsters who one by one pinned their name card to their shirt or jacket. The film crew set up the camera in one of the corners of the auditorium. Looking at all the papers they got the students took their seats. It took but a short while before they understood that what Düvell was explaining fitted very well with what they learned from Sam Mampaey only a couple of weeks ago:

“The existing immigration laws in many parts of the world create a shadow zone with its own rules and conditions. For most of us it remains hidden but to who has to live in it, it can be quite disastrous (…) The law clearly is intended to discourage irregular migration (…) but given the large numbers of people without legal residence it is equally clear that this effect is not achieved and that denying these people social services and legal protection rather looks like punishment.”

Referring to his book Illegal Migration in Europe (2006, London: Palgrave McMillan) Düvell went on explaining the history of the concept:

“Illegal migration was first used in the 30s of the last century when unwanted Jewish migration to Palestine was named illegal by the British authorities. It was again used in the 1960 an 1970s although only here and there. In fact, the concept became popular only in the 1980s and especially during the 90s. Before that migration wasn’t regulated (…) unexpected immigrants were called spontaneous and often could legalize their stay without much problems. Only around the 1970s when the post war boom came to an end, liberal rules and guest workers’ programs were abandoned. In its place came laws who would exclude self chosen migration and would limit previous laws and liberties.” 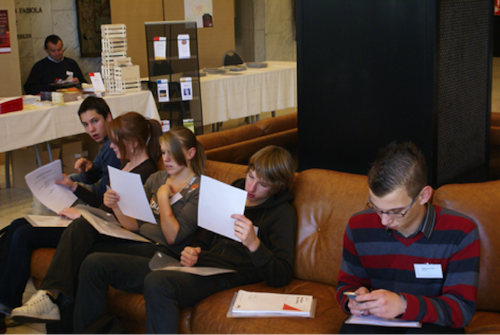 What Düvell was explaining was that illegal migration is not a natural given, not a phenomenon that has always just been there. On the contrary, so he continued, it is a social construct of a specific political and judicial practice that is badly adapted to the reality of globalisation. Next to factors accompanying deindustrialisation (especially the demand for cheap labour and the tensions between flexibility and rigid government rules) illegal migration is co-caused by the paradox of growing global integration, mobility of capital, information, goods and international transport on the one hand, and the ever more stringent limitations of migration and the free movement of people on the other hand. With the growing illegal underclass within their borders, liberal states face a serious dilemma. To understand this, Düvell continued, one doesn’t need to do more than ask a few simple questions:

“Is it possible, politically, practically and ethically, to deport the 4 to 8 million illegal immigrants in Europe? Is it possible to control companies, households and ethnic minorities so as to make it impossible for them to hire and house illegal migrants? Is it possible to exclude people without legal residence from markets and public services so that their stay becomes utterly impossible?”

In authoritarian regimes this might just work, Düvell answered, and he explained:

“At the Turkish borders illegal migrants are shot, in Libya masses of people are deported and in the Ukraine non-whites are controlled daily and neighbourhood police is constantly busy looking for hidden illegals. But in a liberal democracy, human rights, the freedom of enterprise, the rule of law and a critical civil society, won’t simply stand for this. Moreover, research shows the stricter border controls the more sophisticated illegal migration becomes, it also simply goes more underground into the shadow zone. So, contrary to extremists’ beliefs, it looks like repressive measures are counterproductive.”

This almost automatically leads to the question what alternatives there are. To conclude Düvell gave the audience the following list of possibilities to consider:

“(1) Amnesty or general regularisations, (2) introduction of more legal migration channels (such as circular migration or guest workers’ migration), (3) redirecting budgets for immigration controls to development aid, (4) political integration (as the successive expansions of the EU have also legalised quite some former illegal migration), (5) take the economic literature more seriously and accept that the free movement over the globe delivers sufficient gains to lessen the migration push considerably, and (6) publicly defend those political philosophers who defend the right to migrate on still other grounds.” (JWW, p.200-201)

After reviewing the European legislation, the third part of Analysis would lead the students to the understanding of the global reality. But before going into that we would take the step to have the students take the learning process into their own hands. This happened for Dutch (but also for the other courses) and made us, right after the exams, during the Christmas holidays, summarize and schematise the learned content, and together with the art works, the brochure, posters and photographs we made, present it to the wider public in the local library: “Expo Jongeren Worden Wereldburgers” (hence the later title of the book for teacher trainings). This way the students would acquire a reflexive understanding of their own enterprise. The expo became the main item in the AVS TV news on New Year’s Eve. (Please click on the subtitle button.)