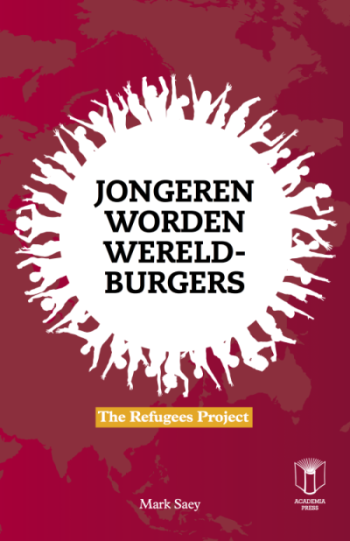 Somewhere in the middle of the part “Interviews” I entered the teacher’s room looking for what was in my locker when the principal summoned me in distress. Going to his office, opposite the teacher’s room, I read the short note one of my pupils had written me. ‘Dear sir Saey, My parents told me to tell you that I am no longer allowed to participate in our project.’ Once the door closed behind me, the principal nervously asked: ‘Mark, your project is a kind of research, right? Tell me it’s just research…’ Only just finished reading the note I could but mumble ‘How so?’, upon which the principal explained his concerns. ‘I got an angry call from the father of one of your pupils. He thinks having pupils interview undocumented migrants is not done. It contradicts his conviction. I quickly answered it’s but a research exercise. But I’m afraid if you make X do an interview, we’ll get into trouble.’ ‘Even when X can do the interview in class?’ ‘Yes, the dad absolutely doesn’t want X to participate any longer.’

Though the reason for both the note and the angry call was quite clear, I stood amazed. Note and call couldn’t have anything to do with the given reason: ‘because the project includes work outside school hours and the activities cost money’. Nothing we did outside normal school hours demanded more than what most homework or extra school activities imply. And no activity costed more than 10 euro. Every pupil lacking money could also count on financial aid, something clearly communicated to parents each year. So far X had taken part in a very good way, his marks were above average and no test or assignment had led me to believe he had some pressing problem. His parents not attending the “Info-evening” therefore raised no questions. But the real reason clearly was “political”.

Why that posed a problem to our principal is not so difficult to explain. Article 24 of the Belgian Constitution states that public education should be neutral: ‘The community organizes neutral education. This implies, among other, respect for the philosophical, ideological or religious convictions held by parents and pupils’. And Article 41 of the Schoolpact law states that no political propaganda is allowed within school walls, which is further explained in the Omzendbrief Zorgvuldig Bestuur Secundair onderwijs SO 78 (Circular letter Faithful Policy Secondary education) of November 27th 2001:

Though in education there is quite some confusion about these rules, it’s quite clear that all the forbidden activities are of a party-political and/or electoral nature. If not, it would be hard to see how several other official documents could ever be not contradictory. Since this is an important matter, I will expand the argument.

To show the party-political and/or electoral nature of the activities concerned. This should be clear when we compare two rulings by the Commissie Zorgvuldig Bestuur (Commission Faithful Policy) of the Department of Education. On June 2nd 2003 the Commission ruled on a complaint made by the political party Vlaams Blok, that the poster (in a school) ‘To give your vote to extreme-right, is to lose it’ should be removed, because the poster was directly or indirectly used to support or criticize certain political positions and/or parties. Maybe the reader might frown reading this, but the Commission held the word ‘vote’ and the use of this poster during a former period of elections to be sufficient arguments for its decision. On December 1st of the same year the Commission however ruled differently on a very similar complaint (again made by the Vlaams Blok). This complaint was about another poster ‘Never again extreme right! They have already shown us how they solve the crisis and social problems’, that was found in the ethics classroom of another school. This poster could stay, the Commission decided, because it was not directly connected to any electoral campaign nor held any advice to vote this or that party, and was being used as didactical material for the ethics course.

In his comments on both decisions Professor Dirk Voorhoof wrote the Commission stretched its interpretation of the Schoolpact law too far to rule on the first complaint. Maybe this will surprise, but I disagree. I will explain shortly. But I do agree one should not too strictly limit resisting the extreme-right and racism in schools, or – to generalise the principle – put too many rules on expressing the world-citizenship education is or should be more committed to, nor limit the use of didactical tools and methods for democratic citizenship education.

If one doesn’t want to get lost in interpretations of several other official documents and how they are in accord, then there simply is no other way to state the matter. Since there are quite some documents stating education and teachers (not only ethics and religion teachers) should be political. First of all education is bound by law to uphold Article 29 of the Convention of the Child. As I show in this book: it can and therefore should do this far better. Second, teachers sign the Declaration of commitment to public education (Verklaring van gehechtheid aan het GO!), the Pedagogical project of public education (Pedagogisch project van het GO!, PPGO) and the Declaration of neutrality (Neutraliteitsverklaring). From each I take some sentences making the political immediately clear:

‘I, who sign (…) appreciate in particular the specific orientation of public education, characterised by open commitment and active pluralism, in which all democratic religious and social visions have their place.’

In the PPGO one reads that it induces:

‘social commitment, responsible use of space, world solidarity, tolerance (…) it aims to educate free people (…) who are concerned with social reality and inequalities: stand to respect the Rights of Man and his fundamental freedoms, for social justice and democratic institutions (…) who hold the equal worth of all and the emancipation of every individual not only as principals, but also commit themselves to realize them.’

And finally from the Declaration of neutrality:

‘I know I can and may make my personal commitment known if the educational situation demands it. This however I will do wisely and honourably, meaning I will abstain from every form of indoctrination and/or proselytism (…) I will use every opportunity to explain and teach pupils the values of active pluralism: respect for the Rights of Man (…) defending democracy and respect for the rights of minorities (…) separation of church and state, equality between man and woman.’

Next to these, lest we forget, there are the many transversal goals one simply cannot develop or strive for without engaging in politics. And these goals apply to all school nets, not only public education.

Conclusion of this judicial excursion: education is not allowed to engage in party-political and electoral activities, but this does not mean it is free of political commitment. On the contrary, it stands for – in one word – world-citizenship. If this were not the case, one should today fire half the personnel for participating in the activities or using the services of Broederlijk Delen, Amnesty International, School Without Racism, and so on… The difference between politics and party-politics therefore is very important. This difference one cannot reduce to the difference between politics and ethics, for this is about social virtues and collective values. Maybe one better speaks of the difference between party-politics on the one hand and the ethical-political of education on the other.

But the real issue is that education has to urgently find a sound and decisive solution to the problem of (possible) indoctrination – which is exactly why so many teachers tremble when it comes to any and everything political. That is also why above I said I agreed with both rulings of the Commission Faithful Policy. Not because I think political parties systematically indoctrinate the public, but out of precaution: especially because the electoral event and the growing role of the media therein can today hardly be described as of high quality. But next to simply being cautious, we need a useful tool to ensure teachers and schools do commit and engage themselves, and at the same time will do this without indoctrination.

Indoctrination comes down to spreading questionable or uncertain opinions and convictions with the aim to have them accepted without critique or investigation. This is why the LWZ, especially in the phase of analysis, will present the scientific facts and theories as clear and open as possible. This it will do thanks to sufficient preparation and seeking independent voices and evaluation (as we did e.g. during the Starthappening or the CEMIS congress on solidarity and migration). This of course can never be guaranteed in a couple of hours or lessons. In contrast to more classical project teaching or the few lessons on politics pupils sometimes receive, the LWZ will dedicate several weeks to its phase of Analysis. Next to that it will always make a distinction between Analysis and Values/Alternatives, to not mistake what is for what should/can be – which also is secured by the step-to-step plan, as we have seen. And finally, next to the explicit or implicit teaching of critical thinking skills, the LWZ will create the necessary room for dialogue, between pupils or between pupils and other voices. This it will do inviting experts, engaging in public debate, discuss with parents, organising a political debate (all parties invited), and so on – all things Flemish pupils today score so very poorly on.

An LWZ will not engage in party-politics, will not organize a party-political event. Maybe the reader will think it relevant to know that I’m politically independent, am no political party member. Such membership of course is not forbidden, as long as the party is in accord with democratic values and human rights, in short: with the world-citizenship education is committed to. But an LWZ is more than research, it symbolizes and expresses more than any other teaching practice the ethic-political stand of education, to support the classical transfer of knowledge and to improve citizenship education without indoctrination. This decisive solution to the judicial problems surrounding the ‘neutrality’ of citizenship education is another strong argument to implement the LWZ in Flemish education. To hold back the social, political and economic pragmatism it too often is pray to, yet at the same time express more forcefully the world-citizenship it always should have been committed to.

So I answered the principal that, though I was investigating a lot, the LWZ was more than just research, especially when seen from a pupil’s perspective. But we concluded we should somehow meet the parents halfway. For we are also obliged to not hurt dissenters – which would not be pedagogically very sound anyway. Consequently I would not oblige X to do an interview, but he still would have to do every other task and take every other test, so help continue the LWZ. Whether this was a honourable decision or not, I leave to the reader.

CivicLab advises the government and school nets to implement these LWZ in (at least) the last four years of all schools and strands of secondary education, when in cooperation with CivicLab sufficient good examples are developed. To that end CivicLab has already prepared a draft for the workings on the next project phase.

CivicLab SERVICES includes a study day for schools wanting to set up the LWZ to become a Transitschool – broad school for world-citizens.